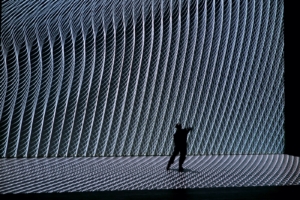 Reckoning with quantum physics, Japanese avant-garde art scene “maestro” Hiroaki Umeda hypostatizes that these batches of abstract information are merely human belief system: “When one has confidence in an object's factuality they name it as real, and when this confidence is slightly undermined they rename it as virtual” he stated.

Cosmic Lab is a multimedia studio formed by audiovisual artists and creators based in Osaka, Japan.

We discovered this amazing collective thanks to ADAF 2020 and we fell in love straight away.

Cosmic Lab possibly represent the archetype of the audiovisual artist, rooted in the art world and the underground clubbing scene.

As many Japanese new media artists they are not afraid of experimenting and mixing up techniques and styles. As far is it’s punchy, alluring and visually stunning they will use it in their performances.

Here our top picks from their impressive portfolio of audiovisual projects:

As we said: no fear of experimenting. Here we see a very interesting fusion between hip hop and audiovisual culture.

At the opening event of MAGNET by SHIBUYA 109 “ShibuGekiSai”, Cosmic Lab and Doppel collaborated on a performance combining live painting and video projection.

The 3D video cubes are animated in motion graphics by the audiovisual artists guiding the graffiti artists on the patterns they will fill with their spray cans.

The DJ spins tunes throughout the performance linking graffiti and projection through the overall hip hop groove.

An audiovisual feast and a once-in-a-lifetime experience to celebrate the Koyasan’s 1200th anniversary (The center of Shingon Buddhism).

We see something truly remarkable and unique: a fusion among the vibrating tones of the Buddhist chant, Japanese drums and an elaborate projection mapping.

Under the musical inputs and the AV latest technologies the great Pagoda comes alive. The result is spectacular, mesmerizing and sumptuous to honor the ancient tradition of Japanese Buddhism.

Here Cosmic Lab went a few steps ahead by reinventing the way of making AV live performances through a new tool called QUASAR.

It loosely reminded us of the Reactable Machine, developed in Barcelona in 2003 to make music through physical interaction.

In this next-generation AV instrument, each musical measure is not interpreted in a linear fashion, but as an endless loop.

Also the tangible interface gives a physical structure to the AV content making possible to build rhythm and layers in all new intuitive physical way. Impressive!

The spectrum of audiovisual artists is as broad as the tools and different languages available.

Each artist explores a particular area of the audiovisual. The sum of all their artwork is what defines audiovisual culture.

Of course the definition is fluid and ever-changing due to the technological evolution and the constant offspring of new artistic languages.

Tatsuru Arai investigation embraces one of the most important aspect of the audiovisual culture: the synesthesia, the condition under which two or more senses are perceived simultaneously. In his specific case by visualizing the geometric structure that rigs the musical composition.

One of the first artists to investigate the relations between music and imagery was Kandinski. He explored how different shapes and colours relate to each other by communicating different movements to the viewer. Same as different notes, rhythm and music patterns relate to our inner soul, triggering different emotional movements.

The Japanese artist (currently living in Berlin) features an interesting background of music composition, computer programming and multimedia art. Arai’s generative art is highly complex and goes beyond the audiovisual genre. It takes on a profound reflection around the universe and its structure based on vibrations, as advocated by the theoretical framework of the string theory.

His series “Principle of Hyper Serial Music” starts a direct dialogue with the Serialism movement developed by René Leibowitz and Pierre Boulez. The series adds “innovation” to the three main points of the serial music: “structural”, “complex” and “noisy”. Arai achieves this by incorporating AI within the musical composition and the visualization of its structure.

The result is an audiovisual duet between human and machine with the two elements constantly learning from each other in his ever-evolving investigation. Ultimately, Tatsuru uses the sound and its visualization as a key to make experience of the nature of the universe, even if just a small part of it.

ADAF is an audiovisual event constantly evolving along with the new creative trends and breakthroughs within the digital arts, without loosing the core vision of its foundation days.

Every year the organisers finetune their artistic program through their open call for audiovisual artists, to keep themselves up to date with the ever-evolving new media art landscape.

From the initial focus on video art, installations and live performances they have been widening their program up to include Virtual Reality experiences (VR), Web Art, Video Games and more.

The Athens Digital Arts Festival has been founded in 2005 and it is the pioneer longest living institution in Greece dedicated to audiovisual culture and digital arts. This year, as other audiovisual events, ADAF is responding to the Covid19 crisis with resilience and creativity.

Their 16th edition ADAF ONLINE| TECHNOTRIBALISM will be accessible to everyone through the internet. More than 5,500 audiovisual art proposals from 100 countries around the world are the source for the ADAF 2020 program selection.

The 2020 year theme reflects upon our primitive status in the foundations of the new hyper-informational world, where the data-flux is absorbing the entire existence reaching the status of God.

Is technology serving us or we are serving the data-totem by providing our more sensible information, giving up our privacy for a greater good?

Algorithms, already present everywhere in the digital realm, are reading us better than ourselves, better than our friends and siblings and in the name of  optimization of our virtual experience, we are gradually letting them make decisions for us, filter our perceptions predict our behavior, our bio metrics, our emotions.

All manifestations of culture can now be experienced on a digitized basis, translated to a language (code, DNA) and stored for everyone who possess it to experience regardless the circumstances. Markets and Money are transfiguring into intangible algorithmic byproducts. Everything to serve the information flow.

Close your eyes and connect to your data-doppelganger your mirrored algorithmic self to your digital footprint. You are part of techno-tribalism, you are part of ADAF 2020.

The 21st Commonwealth Games took place in April 2018 at the Carrara stadium in Queensland, Australia. Produced by Jack Morton Worldwide, the opening and closing ceremonies were spectacular shows with 4.000 volunteer performers. Combining theatre, dance, and music, the shows were created to reflect the Gold Coast culture, embodying its spirit and its energy.

After winning the tender, The Electric Canvas prepared the event over 6 months. To achieve such a large-scale video projection in the stadium, they chose 20 x Christie Boxer projectors, as well as Modulo Kinetic, a powerful media server with advanced features from Modulo Pi.

Peter Milne, Director of The Electric Canvas, explains: “I’ve been involved with Yannick Kohn – founder of Modulo Pi – and his technology for nearly 20 years now. When he launched Modulo Pi in 2010, we were very keen on adopting his latest system, Modulo Player”. Recognized internationally as a leader in large-scale and architectural projections, The Electric Canvas has relied on Modulo Player for several years now: “We use Modulo Player on many projects because we really like the X-map among other features.”

When entering the bid for the Gold Coast 2018, Milne chose Modulo Kinetic, Modulo Pi’s new media server solution: “We were very excited when Modulo Kinetic was launched, and now we have quite a lot of Modulo Kinetic servers. In fact, when we proposed Modulo Kinetic to the Commonwealth Games, we only had a few months experience with it. That was possible because we trust Modulo Pi when it comes to this type of software development. We were sure that their technology would be reliable and solid because of our previous experiences with Modulo Player.”

Working closely with the content producer, The Electric Canvas designed the projection overlay which determined how to cover the field of play, and how to project the other elements efficiently, while providing maximum creativity.
The main video projection was a visualization of Earth and its history, projected on the stadium playfield. This came with several challenges: “We had to put the 20 video-projectors at a height of 67 meters above the ground in the sports lighting towers. We did this because the stage was covered with sand, so there would have been a lot of unwanted texture, had we projected from a normal setting position. Especially as the sand was being constantly disturbed by the performers. Putting projectors so high was a difficult thing to do, particularly for technicians, who had to climb more than 200 steps every day to get to the top of the towers. But it was all worth it in the end, as the resulting image quality was very good” comments Peter Milne.

To handle all necessary changes, the flexibility in the video-projection programming brought by Modulo Kinetic was a must for both ceremonies of this major event: “Ceremony production is a very unique process. There are changes in the choreography or content every day, so you have to have a very flexible system to be able to cope with those changes and incorporate them, sometimes even within the same rehearsal.”

In a time-critical context, The Electric Canvas’ operators made the best of Modulo Kinetic’s capability to preview the show in 3D: “During the day, when we don’t have the benefit of darkness, we can run the show from the recording of the previous evening, using video of the rehearsal, to then further fine-tune the programming of the projection.”

The show also included 3D mapping on Migaloo, a 30 meters long inflatable white whale, handled by 12 puppeteers. The whale floated into the arena, with content projected onto it after it reached its final position. The projection on the whale then transferred to the field of play at the end of the sequence.

The show video was synchronized to timecode, which was delivered with the music, but sometimes had to run independently from the timecode, as Milne explains: “In the case of having to hold entries and exits by the cast, or other unplanned factors, you need programming strategies, creating loops in the content so you don’t have any unexpected result in the picture when the timecode stops, or when something unexpected happens in the show. There are a lot of media servers who don’t cope with this very well. Having a strategy whereby you can, at some point in the music, ignore the timecode, allowing the music to stop and to loop, waiting for something else to happen when there’s a mechanical breakdown on the field, or when somebody falls over, is crucial. These contingent loops are a major and important part of these live shows, so having a system like Modulo Kinetic that deals with those contingencies, in a very fluid and flexible way, is essential.”

Operators could also rely on the backup capabilities of Modulo Kinetic: “On a show this size, you have many departments involved, with everybody running from the timecode. One other important feature of Modulo Kinetic is the automatic reversion to back-up systems, should we have a computer problem or failure. That is also something Modulo Kinetic is good at.”

In the end, the projection was impressive and looked very good in both ceremonies, with The Electric Canvas receiving lots of positive comments. About the utilization of Modulo Kinetic on this international multi-sport gathering, Milnes concludes: “It was reliable, flexible, and easy-to-use in a situation that can sometimes change dramatically every day. The Modulo Pi media servers are very specifically built for technicians and for the creatives that do the type of work that we do. Because the Modulo Pi team listens to technicians and creatives that work on projects, they modify and improve their software specifically on that feedback. For us, that’s an enormous advantage compared to other much larger companies.”