Born in the heart of the VJ boom in the 90s, after their own artistic experimentation, and Michael’s first ever (what we would call now) VJ gig in 1985, Michael Denton and Anna McCrickard formed Overlap in 1998. They are based in Hastings in the UK. Unlike some VJs, who purely focus on the visual side of the art form, Overlap are a an AV collaborative duo in the purest sense of the concept, who also produce minimalist music in parallel with their exploration of both moving and still image. They’ve also performed at many a festival, forming part of a collective of VJs represented by Microchunk.

Their work takes the form of live audiovisual performances, exhibitions, transitional paintings, installations, VJ sets and even prints, and takes on audiovisual culture from a fine art perspective, which makes their work both fascinating and unique in a wide variety of different contexts.

Overlap also work with the Noise of Art collective as resident VJ-s and moving image artists. Their fine art single screen video works have been screened at the ICA, BFI and Tate Modern. Recent projects include:- a celebration of 100 Years of Electronic Music at the National Portrait Gallery London; Forest Tree limited edition for Sedition Art; audiovisual “painting” installations for the National Trust’s Fenton House and Calke Abbey; opening the Arquiteturas Film Festival in Lisbon with their Places that Dance AV set; short films “Returning” and “Switch” awarded special mentions at the Avanca and EMAF film festivals; an audiovisual performance in the British Ambassador’s Residence in Beijing. Recent art screenings/performances of their works have included Aquatint at Riders on the Mall/ROM, MUSZI, Budapest and Digital Graffiti, Florida, Forest Tree at STRP Biennale at Strijp S in Eindhoven and Cloud Edged at Light Fantastic, House of Nobleman, Frieze.

Perhaps one of the most poignant aspects of their audiovisual artwork is its accessibility and ability to be embraced and engaging in such an extensive mixture of spaces, including performances and installations everywhere from music festivals (Creamfields, Splice festival, Madatac, Fiber, Generate, Big Chill, STRP Biennale); and night clubs (Razzamatazz, Barcelona, Wonderland – Eden, Ibiza), to prestigious galleries (Tate Modern, Pompidou, National Portrait Gallery, the Victoria and Albert Museum), as well as being featured in some important publications on VJ culture, such as Audio – Visual Art and VJ Culture (2006) They even remixed and VJed The Beatles Magical Mystery Tour film for its cinema première at the South Bank with Noise of Art at London’s BFI.

Their most recent work includes Transitional Landscape, designed for exhibition and art installation, ‘Rooms’, which explores the relationship between indoors and outdoors, combining and fusing luscious wallpaper motifs with beautiful organic landscape scenes. It juxtaposes man-made life with that of the wonders of the natural world.

Find out more about their work here:

Leading audio codec manufacturer Tieline will unveil the new Gateway IP audio codec for the first time at the 2020 NAB Show. The Gateway is a compact and powerful multichannel IP audio transport solution for radio broadcasters and can stream up to 16 IP audio channels with support for AES67, AES3 and analog I/O ... 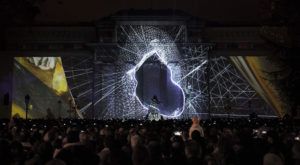 Onionlab is a multidisciplinary studio. They create interactive products and experiences, motion design movies and audiovisual shows for companies that want to be related to technology, design, and art. Their works are based on the aesthetic attention to detail and the technical innovation.

Starting from graphic concepts and detailed ideas, they get lost in the development and find themselves again at the resolution. They usually make use of the power of scripting and the seduction of music and sound design. They are interested in learning in each project, that’s why they invest many hours researching. They like collaborations.

Music is a source of inspiration for them, and it is often the starting point of their work. VR (virtual reality) experiences, projection mapping, stage design, and music videos are some of the formats through which we relate to music.

Skilled in animation, design, illustration, 3D, 2D, interactivity, interaction, and live-action -and seamlessly combining some or all of these- OUCHHH considers each project as a challenge and takes a fresh and unique approach to each other. They have an office in Istanbul, and partnerships in L.A., Vienna, Barcelona, Paris, and Berlin.

The studio has created the “POETIC AI” Solo Exhibition at Atelier des Lumières, it’s a world’s largest AI exhibition which will last for 6 months.  It uses 50K pixels and in total 136 projectors, 1 million people visited the exhibition in 7 months.

The studio worked with many brands such as Google, Cern, Nike, Wired, their collaborators transcend all industries and all continents. Their works have received multiple accolades and awards in the international arena. Ouchhh has been featured at Ars Electronica 4 times and will be attending for the 5th time this year.
They became Istanbul’s first new media agency to win Reddot design awards, German Design Award, 10th Annual IDA Awards (The International Design Awards) and ADC Awards ( The Art Directors Club), in addition to an Honorable Mention from the City University of Hong Kong.